In recent times the Kraken featured in the movie ‘The Pirates of the Carribean: Dead Man’s Chest’ as Captain Davy Jones pet. It swallowed Captain Jack Sparrow and his Pirate Ship- The Black Pearl, whole. Unfortunately, it was the last of its kind and killed by Davy Jones himself under the orders of Lord Cutler Beckett. 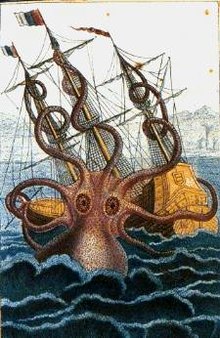 “The Kraken is a legendary sea monster of giant size that is said to dwell off the coasts of Norway and Greenland. Authors over the years have postulated that the legend originated from sightings of giant squids that may grow to 12–15 meters (40–50 feet) in length. The sheer size and fearsome appearance attributed to the Kraken have made it a common ocean-dwelling monster in various fictional works-(Kraken In Popular Culture)-.

It was first described by the Dane Erik Pontoppidan in 1752”

An Irregular Sonnet about the Kraken

“Below the thunders of the upper deep;
Far far beneath in the abysmal sea,
His ancient, dreamless, uninvaded sleep
The Kraken sleepeth: faintest sunlights flee
About his shadowy sides; above him swell
Huge sponges of millennial growth and height;
And far away into the sickly light,
From many a wondrous grot and secret cell
Unnumber’d and enormous polypi
Winnow with giant arms the slumbering green.
There hath he lain for ages, and will lie
Battening upon huge seaworms in his sleep,
Until the latter fire shall heat the deep;
Then once by man and angels to be seen,
In roaring he shall rise and on the surface die.”

“In a 1800s sighting, John Batchelor stated that as the monster attacked the ship, it “emitted a dark fluid which has a very powerful and noxious odour”, confirming the myth’s actuality”

“I shall swallow the whale and ship, empty the sea, and appear in red when you are cursed.” ~~Akkorokamui

Once, spirits cursed Rebunge, a villager of Abuta Toyoura, to see the destruction of his town. They sent a part-spider-part-human creature, Yaoshikepu (ヤオシケプ), to fulfill the curse. Yaoshikepu caused rampant destruction throughout the town, slaughtering so many that the streets were filled with crimson blood. After hearing the townsfolk tremble with fear, the sea kami, Repunkamui, transformed Yaoshikepu into an octopus, and cast her into the sea.

After Yaoshikepu was cast into the sea, her size began to grow, eventually beginning to consume larger prey, such as whales and ships. One day, Akkorokamui gobbled up a boat full of fishermen. In her stomach, they called for help. Hearing the cries, Repunkamui poisoned Akkorokamui, giving her great pain. As Akkorokamui hollered in agony, the fishermen escaped. However, Akkorokamui learned to harness the venom, using it to attack her prey. 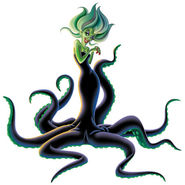 “The Cecaelia is a creature with origins in Asian and Native American mythology, legend and folklore. In particular, accounts of their existence are first recorded among such cultures as the Haida, Tligit, Tsimshian and Nootka tribes.

Among these, the Native Americans seem to attribute a certain connection between the Octopus-People, and the Raven People.”

A man from the Raven tribe happened upon an Octopus-tribe woman with eight long braids of hair, who was using a stick to prod the shore of the beach. The Raven inquired of her: “Octopus, are you digging for clams?”.

At first, the Octopus woman ignored him, but after the fourth time asking, she was fed up with his annoyance. Her hair turned back to tentacles, and she grabbed hold of the Raven. To spite him, Octopus answered him, “Yes. I am digging for clams. These are clams. And I am digging them.”

By then, the tide had begun to draw nearer. As the water rose higher and higher, Raven answered politely, yet nervously, “You have answered my question, Octopus. Thank you. Now, please, let me go”. Despite his struggling, Octopus held Raven fast, until the water grew higher and higher, and at last, Octopus left Raven for drowned.

Raven’s people, having watched the whole ordeal from afar, did nothing, as they knew his nature as a trickster. The next day, he was back (having easily returned from the dead), but from then on, he never asked another question of Octopus again. 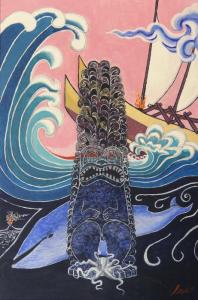 In the traditions of ancient Hawaiʻi, Kanaloa is symbolized by the squid or by the octopus and is typically associated with Kāne. It is also the name of an extinct volcano in Hawaiʻi.

In Legends and Chants

Kāne and Kanaloa are complementary powers.

Kāne was called upon during the building of a canoe, Kanaloa during the sailing of it; Kāne governed the northern edge of the ecliptic, Kanaloa the southern; and Kāne then taps them out. In this way, they represent a divine duality of wild and taming forces like Odin–Týr and Mitra–Varuna, and yin and yang.

Kanaloa is also the god of the Underworld and a teacher of magic. He became the leader of the first group of spirits “spit out” by the gods. In time, he led them in a rebellion in which the spirits were defeated by the gods and as punishment were thrown in the Underworld.