The purpose of art is to lay bare the questions which have been hidden by the answers.

Many of us, for a long time, have believed that these two exist in two different realms that never interact with each other and the rest of us will strain to find the parallels in between the two.

However, everything, art, physics and us- the ones who create art and discover physics- live in one world. This may be a futile simplification of things, but I am merely stating the fact that they co-exist.

As our perceptions and understanding of the world we live in evolved, art took a course of portraying the new and differing point of views, meanwhile, physics attempted to explain the facts behind the new vision granted to humankind.

Art and Physics are a strange coupling. Of the many human disciplines, could there be two that seem more divergent? The artist employs image and metaphor; the physicist uses number and equation. Art encompasses an imaginative realm of aesthetic qualities; physics exists in a world of crisply circumscribed mathematical relationships between quantifiable properties. Traditionally, art has created illusions meant to elicit emotion; physics has been an exact science that made sense.

By casual juxtaposition, these two fields seem to have little in common: There are few if any references to art in any standard textbook of physics; art historians rarely interpret an artist’s work in light of the conceptual framework of physics.

From my limited yet varied and unconventional experience of life, one thing has always seemed clear to me, that everything in this world has a way of meeting itself as an image of the other- it all comes full circle. 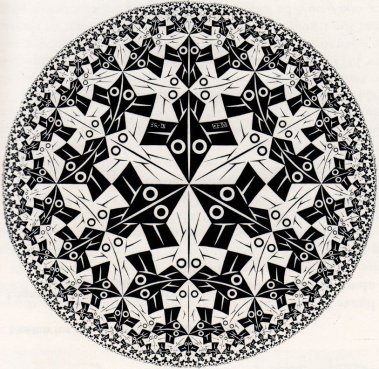 On many accounts, art has found itself explained more thoroughly when seen as a depiction of the mathematical and scientific phenomenon of our physical world. M.C. Escher’s lithographs depicting infinity, relativity, and impossible objects has been a piece of ‘Art’, placed a studied in the mathematics departments at most universities. 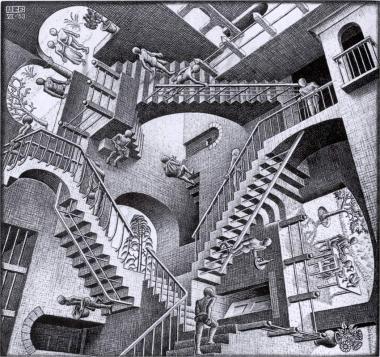 In scientific studies, the most spectacular of occurrences are dissected and represented in bleak numbers, figures, and diagrams, with all elements of awe beaten out of them. As it is for art so it is for science, where the wonderfully mindboggling piece of art, Relativity, by M.C. Escher incompletely understood if one doesn’t know of the ‘Theory’ it stands for as a visual context.

“If you wander around university mathematics departments you will find Escher pictures all over the place. We’ll even find them in the textbooks because they really do talk to mathematicians and from today’s perspective, I think mathematicians understand much more clearly what it is that Escher was trying to do, to the extent that we can actually write down formulas to some of the things that he does and we can investigate what mathematical ideas lie behind them. Mathematicians know their subject is beautiful Escher “shows” us that it is beautiful”- Prof. Ian Stewart, University of Warwick

Excerpted from: The Mathematical Art of M.C. Escher

But to find such accurate and direct representations of mathematical principles or concepts in physics is quite unusual.

“The variety in perception and vastness of art and science as individual disciplines is intensely great, making it extremely difficult for us to make the correlations for ourselves. Unfortunately, for those of us who did not choose to pursue either Art, Physics or Mathematics barely brushed the surface their depths, let alone learning to see these divergent disciplines in the light of each other.”

Both speak of the same story, the numbers match the strokes and the words match the colours. However, much is lost in translation as each retains its own essence in its own language.

“My intention has been to reach artistically inclined readers who want to know more about new physics and scientists who would like to have a framework to appreciate art. Because the language of physics is so precise in contrast to the evocative language of art, I have had to build many bridges using the vocabulary common to both fields. To accomplish this I have had sometimes to broaden the meanings of scientific words, and occasionally to stretch them into poetic metaphors. At the same time, I have had to be very concrete about the interpretation of specific artworks which may make it appear as though I believe mine is the only interpretation.”

Leonard Shlain, a surgeon from California has done us all a great service by studying and compiling these mirror representations- Art and Physics, of concepts that have driven the perception of great thinkers and have also inspired great artists.