There are moments when we stand at doors holding on to a doorknob, sometimes you grasp an ill-fitting handle, more often than not a rusty latch or just a crooked keyhole with a bent key. Doors looming over you, tall and sinister are a stimulus for many a philosophical musing. They send your mind through a whirlwind of questions and have been used for in many stories as a gateway to a land of wonderment and awe.

On our farm, we had 16 rabbits, all white with bright red eyes. I had not read the story about Alice and her wonderland yet so this was merely a coincidence that I followed the white rabbit one sunny afternoon when no one was looking. Before anyone noticed I found my way back to the place where we parked our car. The rabbit followed me and ran back into his cage.

A few years had passed by and I read Alice in Wonderland shortly after quick adventure with the bunny. And was instantly jealous of her, she did not even have her own bunnies.

I realized the one morning around the time as the ploy of the Matrix gripped me. I looked at the bookshelf packed with classics and comics, that I have met Morpheus in the form of a book or two, I thought to myself, the mad hatter too with a cup of tea or two.

I mulled over the things I had learned, the questions I had about my world. But the answers, I realized, we have strewn across the path of life.

A decade after, I found myself at a temple in my hometown, on a sunny afternoon. A place I knew I must visit, to rekindle a new light, illuminating the metaphors hidden in objects. On one such visit, on not just any other day, I stumbled upon a pink door. 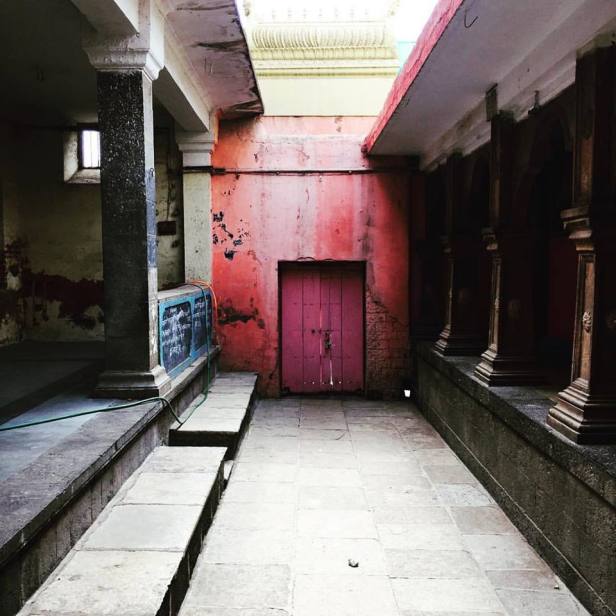 It photographs serene but feels chaotic, memories of it peevish. It reminds me of…

Who followed a talking rabbit with a stop-watch, she followed him all the way, free falling down, down, down the rabbit hole. Finally, her feet hit the ground and there they stood in front of her.

“There were doors all round the hall, but they were all locked; and when Alice had been all the way down one side and up the other, trying every door, she walked sadly down the middle, wondering how she was ever to get out again.”

“Alice opened the door and found that it led into a small passage, not much larger than a rat-hole: she knelt down and looked along the passage into the loveliest garden you ever saw.

How she longed to get out of that dark hall, and wander about among those beds of bright flowers and those cool fountains, but she could not even get her head through the doorway.

There seemed to be no use in waiting by the little door, so she went back to the table, half hoping she might find another key on it, or at any rate a book of rules for shutting people up like telescopes: this time she found a little bottle on it, (`which certainly was not here before,’ said Alice,) and round the neck of the bottle was a paper label, with the words… “DRINK ME”

I turned to the priest, he said to me, “Shiva is the creator and the destroyer, he is half man and half woman, he is nothing and everything.

I felt a realization almost dawn upon me but it lasted for a few seconds. He gave me a teaspoon of a potion made of milk and honey which was the offering to the presiding deity.

I walked backwards, towards the pink-door my eyes on the sanctum-sanctorum, as I reached the door I had to turn around. I half expected it to be locked shut but it was open and I walked out into the street.

The place looked different, I realized that there was more to it than meets the eye.

Alice got a note, and I a priest, but poor Neo had agents chasing him, they needed to know what he would know not long after he stepped out the door. His curiosity drawing him towards a destiny he did not choose.

He followed the white rabbit… He went up the elevator and met Morpheus.

“ You take the blue pill, ”Morpheus says to Neo in The Matrix , “ and the story ends . . . . You take the red pill and you stay in Wonderland, and I show you how deep the rabbit – hole goes. ”

Alice and I were looking for the children trapped within ourselves, our doors to wonderland metaphors to a world that gets curiouser and curiouser.  Neo knew not of a younger self. He was ensnared a trapped within the matrix, he had a job and he was a hacker. Older minds are much tougher to reach than minds of children. Too many paradigms to shift before we know Neo is ready and even more to shift before Neo knows he is ready.

It’s a tempting offer, isn’t it? For at one time or another in our lives, we’ve all wanted to escape — from a dull and tedious job, an impossible relationship, from the world in which we often have so little control over what happens to us.

Perhaps it’s for reasons such as these that our culture has become positively obsessed with the idea of transcending the confines of this world for the cool fresh air of another. Whether it’s by a red pill, a secret wardrobe, a looking glass, or a rabbit – hole, it doesn’t really matter. We ’ ll take it.

When you figure out how to leave the barriers will fade, the door beckoning you through. No longer captivating are the insides of four walls or the four corners of a computer screen, you will be drawn to escape into Wonderland.

We pack our bags, down the rabbit hole “As Above Down Below”. A vortex of reality and truth. Of empty orange marmalade jars along the way.

In a blink of an eye, mindless dusting off, with scarce intentions of finding lost baggage, but loathsome fear of having lost it. Home, that cosy nook in our lives. Like looking up from the bottom of a well towards a sky you left behind.

After a brief moment of ‘Eureka’ and you believe you have the answer, but as quickly as it grips you the faster it eludes you.

The nature of the question changes as the first possible answer nears penultimate clarity. And then you are chasing two questions and a choice to be made-Which question should I drop and which one should I follow?

It is presumed that

Then we met Neo -the oppressed and trapped souls of our world and now that we were one of them I knew more.

The sceptic in you grows wiser as she ages with experience. You have shrunk and grown and been thrown about, buy a potion, cake, mushroom or pill. But you were thrilled at the bitter as much as you were for the sweet. For you knew that every thorn and petal, twig and leaf, a puddle of tears and rubble of laughter layers the path to your garden.

Waking up in the morning to the sounds of traffic and an impending doom of piles of tasks and chores to get done before the night. Rushing to the bathroom rushing out to the street into another building where you work. You look at your diary.

You have a set of clothes on you, the look of the day. A bag with your personal belongings and mental notes of their whereabouts. As twilight hits, urgency sets in to return to your other set of belongings.

These lives, we realize are no playground for a child.

“I’m Sure I’ll take you with pleasure!’ the queen said. ‘

Two pence  a week, and jam every other day.’

Alice couldn’t help laughing, as she said, ‘I don’t want you to hire me-and I don’t care for jam.’

‘You Couldn’t have it if you did want it,’ the Queen Said. ‘The Rule is, jam-to-morrow and jam yesterday-but never jam-to-day.’

We found no jam and we found no hidden truth, for wonderland was just another forking path. Where we asked questions about the real world, we found a labyrinth of unreal answers for we had shut the doors of ‘Rationale’ behind us.

Now we must find our way back to the clockwork of our times. After all the illusion was made for us. Knowing that it is so is enough for us to scourge our minds of any doubt we may have that the world we live in could lead to all the fantastic things from wonderland, not all at once but along the way.

For those of us who refuse to believe that we have reached the last door in Wonderland.

And the moral of the book you now hold in your hands is that there are deep philosophical riches to be had in Alice ’ s Adventures in Wonderland and Through the Looking – Glass, answers to life ’ s ultimate questions, if only you have the proper guide.

Follow the white rabbit, find Morpheus, walk your path. Didn’t you know that there are as many paths to wonderland as there are hearts of people?

2 thoughts on “Following the White Rabbit with Alice and Neo: Finding Doors to a World within our World. ”