In 1704, Sir Isaac Newton published *Light and Refraction*, his study of the interactions between sunlight and prisms. Newton was intent on achieving objectivity, which meant studying sunlight in isolation. He thought colours were contained solely in light, and found the spectrum he was looking for.

When Goethe reproduced Newton’s experiment, he found a set of colours in the boundaries between light and darkness, addling to Newton’s colour wheel and completing it.

As an artist, he believed that one could not talk about light without including darkness. Calling it ‘the light-darkness polarity’, Goethe made this new discovery using another polarity- ‘artistic methods in conjunction with science’.

Scientists and the global science fraternity largely ignored his research. Not until many years later the revolutionary nature of Goethe’s Theory of Colours was recognised, though it is still not considered a Scientific discovery.

Goethe spent more than 40 years of his life on Zur Farbenlehre, which in its own way summarizes and connects his poetry with science. Goethe always knew his work was stunningly radical and he prophesied that it would only be understood generations after his death.

In keeping with Goethe’s method, the three directors work from a personal curiosity as they explore the natural laws and phenomena surrounding human sensory perception. 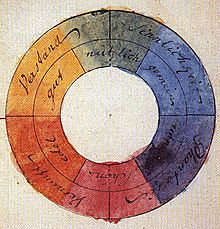